WE ARE AFRICAN CHAMPIONS.... AND SO WHAT?


Tinuola Akinola bares his two cents on the vents leading to the Super Eagles 1-1 draw with the visiting Harambee Stars of Kenya....his words...

Yes the Super Eagles despite all odds won the African Nation’s Cup in South Africa making it the third time the self styled giant of Africa will be winning the bi-annual competition and the euphoria that trailed the victory of Steven Keshi led side has refused to die down and the whole nation and of course the glass house egg heads forget so soon that winning the AFCON is more or less a liability and an eye opener to other teams around that they should not take the Super Eagles lightly again.

While we continue to dance, wine and dine because we won the AFCON, the World Cup qualifiers crept back in and before we could say AFCON WINNERS! The Harambee Start of Kenya came calling and reluctantly left us a point at Eagles nest in Calabar. Need to remind us all that if the Super Eagles failed to secure a ticket to Brazil 2014 then our victory at AFCON will be tagged “Fluke”

My point here is to call on all and sundry to the going on inside the Super Eagles camp, and finds ways to correct the anomalies else the World Cup in Brazil come 2014 will be a mirage. Okay, so maybe we need not cry if we failed to make it to Brazil, forget not that we all have been told years back that “World Cup is not Nigeria’s birthright”

This writer had the privileged to be with the lads for a whole week in Calabar during the preparations for the Kenya match, but I must say what I saw was the least professional in setting, there is no coordination of any kind the security of the hotel was loose as visitors of all kinds had free entry and access to the players, some Eagles even have the compliment of their family members inside the camp.

One wonders what in the world is the role of the Camp Commandant or the Team coordinator? To me this is just another “something” for the boys  as those in charge of  could not control the boys maybe they are afraid of talking to the boys or just incompetence...err....i think the former might be true. Okay the Camp Commandant hands were tied here because the hotel was not locked down which is a big mistake on the part the NFF. 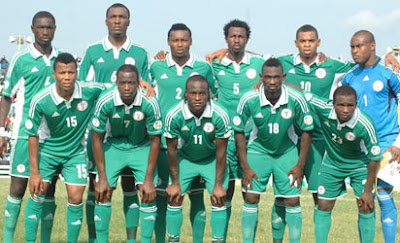 My colleagues’ gentlemen of the press (especially photo journalists) should also be held responsible also if the Eagles failed to dance the Brazilian samba tune come 2014, they come with all sort of unsolicited giant size photographs of the players either with AFCON trophy or during President Jonathan decoration of the players with National Award chasing them all over to get the players attention and to get “something” for the needless photographs.

If the AFCON victory must count for anything then we must be at Brazil 2014 but with what we played against Kenya am afraid that dream might not come to reality. Now the Kenyans are ahead of us if the head-to-head rule comes to play that means we must go to Nairobi or wherever on June 5, 2013 and either defeat them or play a high margin draw else we are in trouble, the question again is can we achieve this?  the answer is YES we can but with the setup of the team right now in terms of camp activities and coordination Russia 2018 might be our next stop as per world cup appearance, God forbid!

The latest report now (unconfirmed) is that the team will train in Germany for the Kenya reverse fixture, I asked why Germany? All I can deduce from this is that some boys are hungry so we need to give them food, why the jamboree in Germany when you can get a familiar weather and playing conditions similar to that of Kenya in some neighbouring countries  like Uganda or Tanzania?.
I pray the  NFF get their priorities right and not this jamboree of preparations that would be counter productive at the end of the day.This is a clarion call to all that have something to do with the Super Eagles World Cup qualifying matches, that with the status of the team now, there is no hiding place for them again.

The whole world is watching and would poke fun at us if we fail to get the World Cup ticket, the saying will be “after all their victory at AFCON was not merited” and it might be a disaster for this writer as well as that might be my first World Cup experience as a journalist, so lets put our hearts together and do what is good to help the team to achieve its potentials which is very huge.

A collective responsibility is key in all we do henceforth, I am not a doomsday apostle, but disaster looms if we fail to do the right thing. A stitch in time…

Tinuola Akinola  (De Strongest) is a Script Writer/Content Director
You can follow him on twitter via his handle:- @strongestpoint
on March 27, 2013