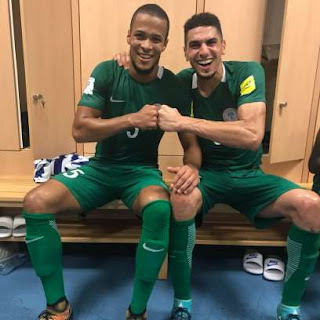 So we lost to the Czech Republic in our last friendly game before we take on Croatia in our first game at the World Cup.

My guest, Emeka runs the rule on the players and how they rated in the game.

FRANCIS UZOHO : Unlike his previous matches for the Super Eagles, was composed especially in the first 10 minutes where he usually exhibits some attributes of being jittery.Made some classy saves but should be bold enough to shout at his defenders when they are disorganized. 7.5.

ABDULLAHI SHEHU: Didn't really improve much judging by his last performance against England. Was a bit lethargic,might be due to the effect of the Ramadan fast and was subbed after the first half. 5.

BRYAN IDOWU: He seems jaded and virtually  got all his crossing wrong on the day. Was through on goal in two occasions but wasted the opportunity even when he should have passed to Odion who was better positioned. Flop of the match in my opinion. 3.

LEON BALOGUN: Had a better performance compared to the game with England. Not really imposing as he used to but did well to maintain the scoreline at its minimum. 5.

WILLIAM TROOST: Needs to communicate more with his defense line. Was solid throughout the game but really need to step up and be more commanding at the back. 5.

JOHN OGU: Was drafted into an unfamiliar role at the back. Brought some calmness in the rather disjointed defense line. Had a decent game but should be playing as a midfielder rather. 7.

WILFRED NDIDI: Freed up Mikel Obi to concentrate upfront. Was really missed against England and also played without inhibition after coming out of a long injury lay off. His marking was swift and clean.7.5.

MIKEL OBI: Still has his bag of tricks but usually tire's early. Combined well with Ndidi and was more relaxed going forward. Was not too spectacular though. 6.

ODION IGHALO: Inefficient upfront as he was not able to get a decent ball from the middle. More of a passenger for the entire duration of the game save for a well-timed shot that was parried for a corner by the opposing keeper. 5.

ALEX IWOBI: Man of the match.Our best player on the pitch. Was mobile, creative and intelligent with his passes and runs. Though he held onto the ball for too long at times. Has to be our shining light going to the Mundial.8.5.

VICTOR MOSES: Played better compared to his last game. Still not at his very best and needs a lot of improvement going to Russia. 6

TYRONE EBUEHI: Brought some bite into the attack going forward. Was a better option compared to Shehu. Had some decent crossing too. His game keeps improving by the day. 7.

ELDERSON ECHIEJILE: Brought some stability at the back. Was much more composed compared to Bryan. 6.

KELECHI IHEANACHO, SIMY NWANKWO AND AHMED MUSA: Were mostly isolated upfront due to lack of ball from the midfield. The trio didn't have much  impact on the game. 5.

(2)THE TEAM HAS TO WORK ON HOW THEY DEFEND SET PIECES.

(3)MIKEL IS AVERAGE, FOCUS SHOULD BE SHIFTED TO IWOBI.

(4)THE "OYINBO WALL" SHOULD BE RECONSIDERED. THE DEFENSE LINE LACKS LEADERSHIP

(5)KEEPER SHOULD ORGANIZE AND COMMUNICATE MORE WITH HIS DEFENSE.