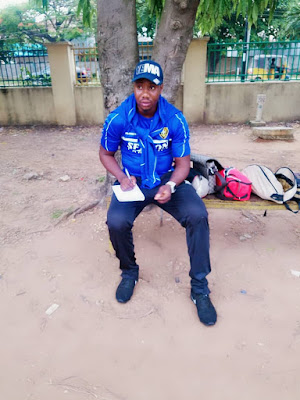 My good friend and youth coach Yema Olanrewaju is here as a guest writer and he gives his 20 kobo on the Nigerian side v England.

Yema, as I love to call him is a former Kwara United, Ocean boys and Crown FC midfielder

He rates the players out of ten in a game Nigeria lost 2-1.

Shehu -  The former Kano pillars player had a game to forget. He was so poor and displayed no confidence and that forced him to give the balls away often time. 3/10

Idowu - The Russia based player needs to do more to convince Nigerians that he is better than Echiejile, he contributes nothing attacking wise and looked suspicious defensively sometimes. Not a bad outing considering the woeful performance of the team in first half. 5/10

Onazi - Many argue he shouldn't be part of this Mundial team with his late shows for super eagles and he proved them right with another paltry performance today. 3/10

Ekong - Looked jittery initially especially in the first half, but later got himself into the game with some good and perfect tackles in the second half. 6/10

Balogun - The early injury sustained by his collision with Joel Obi seems to affect the German-born defender. He struggled all through till he was removed in the half hour. 5/10

Joel Obi - His return to super eagles has not added anything to the team. He has been a shadow of himself and shouldn't make the team to the Mundial. He was clueless with or without the ball. 3/10

Mikel Obi - Not the best game for the influential Eagles captain with the way he gave away possessions, but second half seems to be a bit better with some drive from him going forward. 5/10

Iwobi - The Eagles lone goal scorer today proved again that he is a big match player. Having hit a brace against Argentina last term, he didn't only score again today, but drives and keeps good possession of the ball. Thou later wore out and couldn't do much towards the end of the game. 7/10

Ighalo - Thou  starved passes in the first half and hit the woodwork in the second half that resulted to our lone goal, The former Watford striker needs to do more to be remembered in eagles attack long after he quits.  5/10

Victor Moses - The Chelsea player was not same Moses we all know.  The one we saw today cant lead village to promise land talk-less of a nation. Hopefully, he gets his act together before the tourney proper. 5/10

Ebuehi - The new Benfica man displayed another wonderful performance today. His going forward and pull out were precise and his interchanging of passes and runs were commendable. He is one of our best players tonight. 7/10

Omeruo - The Kasimpasa defender was brought in to play in the three-man centre-back and did a decent job. He will be a great backup with his experience for Ekong and Balogun if Rohr decides to bench him. 6/10

Ogu - The shaku shaku dancer was arguably the best player today, he came in to play from the back and had that problem at the back settled. He made some runs forward with the ball and a good build-up from the back. 7/10

Etebo - Great display from former NPFL star today, he should be a starter in Mundial. 6/10

Musa - Great run from the CSKA man today, also defended well and had a good impression. 5/10

Iheanacho - Didn't have enough time but he has to do more to remain that good player everyone knows him to be. 5/5