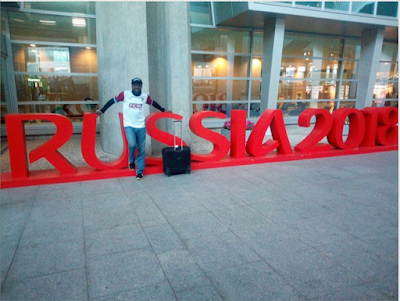 I should have done this two days ago but a whole lotta factors militated against my daily Russia diary.
Flying halfway across the world to Russia is a challenge and then there is the stress of connecting flights, navigating airports, time zones and jet-lag.

Typing this is a struggle but I promised a few folks I was gonna do this so here we go.

Two weeks ago I had given up on coming to Russia to cover the tournament. My sponsors started giving me excuses. Las las rug was pulled under my feet. I was disappointed and started making arrangements to follow the game at home.

I missed the 2014 edition in Brazil due to ill-health and other personal reasons and I was sad that 2018 was going to pass me by.

Last Sunday (a week today), I got a text message that changed everything. 72 hours later I was on an Emirate Airlines flight to Russia via Dubai.

Mad thing if you ask me.

Here is the thing; whatever you are doing biko do it well. A lot of folks are watching and you just don’t know who will send you that life-changing ( or in my case bucket list changing) call or message.

Flight to Dubai was lovely in every sense of the word. If you have flown international in a plane full on Nigerians then you will know what I mean. A few guys had a house party at the back of the plane throwing up yeye pick up lines to the amusement of the female cabin crew.

I saw a flew blushes here and then and before I knew it, numbers and Instagram handles were being exchanged. Some DM sliding in the works right there.

At this point, I just wanna say God go punish all our leaders. Oh boy see town and airport oh. The DBX ( as the airport is know) is like a town. It is the second biggest airport in the world and man is it a beauty to behold.

I have never been to Dubai before and I must say the experience was fantastic. We had a stop over of about ten hours. Luckily we were taken to a hotel in town where I just threw my bags on the floor and crashed.

I woke up to breakfast and all I could here from Tobi Adepoju and Yinka Elebute was how they strolled into town and chilled at the air-conditioned bus stop.

That was the icing for them.

We never ready for Naija. Our leaders go that way, see all the good things and yet see as we dey. I marvelled at the tall buildings sprouting up everywhere in Dubai when I also took a stroll out ( no, I didn’t go to any bus station).

Dubai is a massive construction site, a massive one. Maybe Nigeria will reach that level someday. I’m sure it won’t be in my time, maybe, just maybe my kids will have that privilege.

We later converge at the airport for the 5 hour flight to St. Petersburg which is the NFF’s hub in Russia for the tournament.

The final leg of our trip to St Petersburg was very eventful but I’ll save that for part two of the gist. Did I tell y’all how a drunk dude tried to kiss me? Or how some white dude was busy staring at Chisom Mbonu and smiling (was kinda creepy, I had to go stand between them). How about how when a journo was almost sent back to Naija as we touched down in Russia.

I need rest. This jet-lag won’t kill itself.

Ehen, before I go, I managed to cancel something off my bucket-list during the Naija v Croatia game.