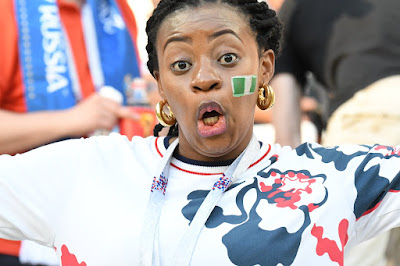 I've been really tired and stressed out of recent so penning a diary was kinda difficult. I'm sorry again this is coming late. A kinda summary but I do hope you enjoy reading this piece.

So we did the fan fest thing with Tobi Adepoju, Deji Adegbenro and Aro Olaoluwa and it was a massive hit.

I wonder why we didn’t think of going for such events in the first place. It was all fun as we met with a lotta folks from different countries.

The irony however was that we were the only blacks at the venue until we bumped into Mamadou, a French citizen of Senegalese descent. We were the cynosure of all eyes with folks wanting pictures and selfies. 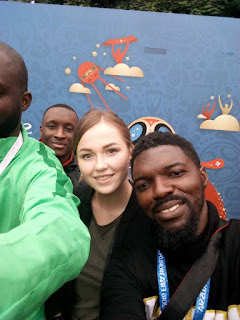 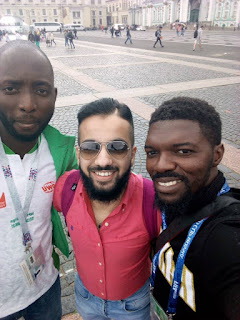 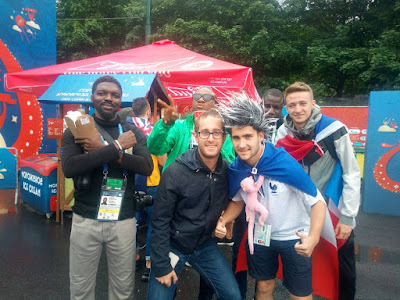 Fan Fest done and were back at the hotel preparing to sleep and then the call came through. We had to pack our gear and head to the airport for the trip to Volgograd where the Eagles were due to play Iceland.

Issue? We were to head out to the airport by 2am.

By the time we got there it dawned on me that a few folks were not on he flight. Kano Pillars henchman Kabiru Baleria slept off and so did a a lot of others.

The two hour flight was kinda cool as I had a very good conversation with Chisom Mbonu and Ayo Ibidapo. We spoke at length about issues pondering journalism, creativity, digital media and life in general.

Brilliant minds they are

We eventually got to Volgograd around 9 am local time (about 10 hours to the game). Deji Adegbenro suggested we go sleep before the game. I agreed as per say we never sleep for close to 24 hours.

That was were the drama started.

Unlike the UK and Amsterdam where I’ve lived, you don’t taxis randomly on the streets in Volgodrad. We didn’t know that part and so our little Odyssey started.

I tried Yandex (local Russia uber-like taxi service) to no avail. Deji tried his Uber but got a message that Uber doesn't work in Volgograd. Yawa.

We kept moving from one part of the city to the other looking for taxis. No luck. We kept changing lanes until we bumped into some volunteers who were able to call a taxi for us.

About 40 minutes later, we were at Lolade Adewuyi’s place. He’s such great fellow that guy. A quick dash to a local McDonalds and then it was straight to sleep.

I needed it badly. 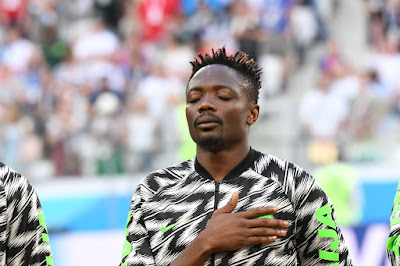 Got to the stadium and straight to the media center where I picked up my credentials and rented a Nikon D5 camera and a 400mm lens before taking up my position pitch-side.

Long story short we run 2-0 courtesy an Ahmed Musa brace. You could feel the joy amongst Nigerians. Folks were drumming outside the stadium and singing the national anthem.

It was a mini Naija gbedu outside the Volgograd Arena. I felt proud to be a Nigerian. Very proud. 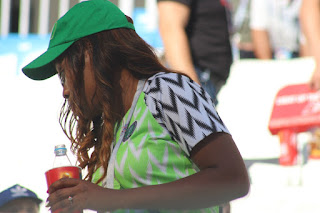 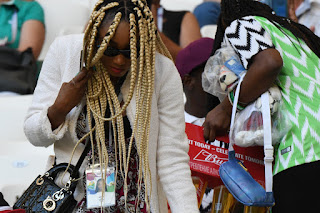 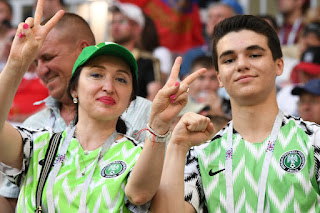 I MISSED THE BUS (JUMP, JUMP)

As the case always is, after every game, journalists gather for a post-match conference but that doesn’t mean anything to those in -charge of logistics as the Naija contingent zoomed off and left journos who had to go attend the press conference (we have to do our jobs innit?)

We had to trek almost 3 kilometres to catch a shuttle to the airport. Luckily we were able to meet the flight back to St. Petersburg.

A lot of folks were not happy but after a few words here and there, it was all sorted and we continued to revel the victory.

I was knackered and super tired when we got to our hotel in St Petersburg. I just brushed my teeth and hit the bed.

NAIJA FOOD TO THE RESCUE

I never knew eba tasted this nice until Jennifer Okoye and Madam Okorodudu (who flew in from Naija) proposed we pay 500 roubles (about 3500 naira) for a plate of Naija food.

Turned out to be a good move as against paying 8000 naira for a plate.

Food came and I was so happy eating Naija food. Eba never tasted so nice. I’m not an Eba person but anything at this moment is a viable option for me.

Ehen, did I tell y’all I took a walk to one rough part of town. I no know wetin enter me. I just wanted to have a feel of the other side of town

Curious eyes followed me around but nothing major per se. A few older folks asked me for photos which I obliged and then I enter up at a lake.


Russia no bad sha but I don dey miss house.

Before I go, I’m sure a few Nigerians will be back here to pay bride price. I’m not saying anything oh. In fact I don’t kiss and tell but in a few years from now we might begin to see kids with names like Emekakov or Akinboboski or maybe even Ibrahiminski.