MATCH FIXING : OF FINES AND INCONSISTENCIES 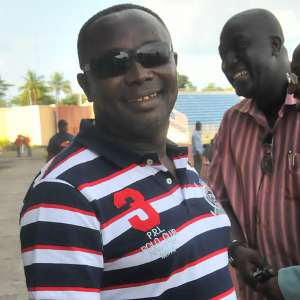 On Wednesday, February 8, 2012, Leye Adepoju read out the judgment of the Nigeria Football Federation Disciplinary Committee.

The committee was inaugurated in September 2011 after Lobi Stars vice-chairman caught referees on the eve of a league game between his side, Lobi Stars and Sunshine Stars, in the official vehicle of his opponents on the day.
(In pic above: Mike Idoko)
In a document signed by Tunde Adegbirigbe, the secretary of the NFF’s disciplinary committee, referees Chrisantus Okoro and C.I.D. Duruma were banned for five years from all football activities.

Manager of Dolphins, Stanley Eguma and chairman of the Rivers State Referees Council, Ere Dokubo were also banned from taking part in any football activity for five years.

Devine Benjamin; the coordinator of Sunshine Stars who was driving the vehicle with the referees was also banned five years from taking part in football activities, while his club, Sunshine Stars were fined twenty million naira (about $123,000).

Dolphins were fined ten million naira while Mike Idoko, Executive Director of the Ondo State Football Agency, parent body of Sunshine Stars was warned of unsporting behavior and the same warning given to Dominic Iorfa of Lobi Stars.

Some background
Iorfa said he was on his way to Bauchi for the game in which his side, Lobi Stars were hosts when he saw an official vehicle belonging to Sunshine Stars at a military check point. 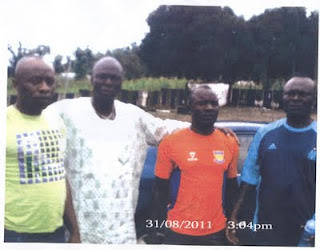 (In pic, right: Dominic Iorfa and referees after they were caught)
He asked the soldiers to delay the vehicle and when he got close he discovered referees supposed to officiate in his team’s game against Sunshine in the vehicle belonging to the away team.

He took pictures of the referees and then called for automatic relegation of Sunshine Stars.

Shortly after that incident, the referees, knowing they had been found out informed the match commissioner that they could no longer make it for the game because of the crisis in Jos and were changed but Iorfa then insisted that it did not change anything and Sunshine Stars must receive their full punishment.

The game in question eventually ended 1-1 with the host team scoring what could have been the winning goal though it was disallowed for offside.

The first hearing
Many will ask how a case between Sunshine Stars and Lobi Stars dragged Dolphins in but all that happened during the first hearing of the disciplinary committee.

Referee, Chrisantus Okoro at the hearing roped Stanley Eguma of Dolphins in saying he got a call from the Dolphins gaffer, urging him to ensure Sunshine Stars lose so his own side can get the advantage to win the League.

Okoro also claimed that the chairman of the Rivers State Referees Council, Ere Dokubo put a call to him expressing interest in the result of the match to go against Sunshine Stars since it would help Dolphins, a club based in Rivers State to win the League.

Second hearing leads to confusion
Based on the revelations of the referee, Stanley Eguma and Ere Dokubo were invited for the next hearing where the Rivers State referees’ boss admitted he called the referee like he does any time referee Okoro has a game. 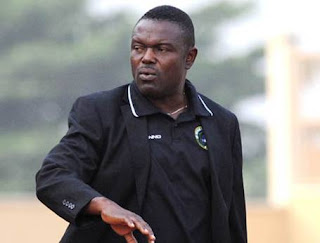 Dokubo explained that being a mentor to the young referee, he calls him up on his way to every league game to encourage him to be of good conduct.

For Eguma, he argued that the referee, Okoro called him first and then he called back, but that was denied by the referee and that session ended with the committee members deciding to visit mobile telecommunications operator, MTN to ascertain who called who first and then nothing else was heard about the case until two days ago.

Case to be judged in ten days
Two days ago, chairman of the committee, Leye Adepoju announced that the case will be judged and the decision made public in ten days but a day later they came up with the judgement on Wednesday.

4.5(1) Any club/official or player or Referee who by whatever arrangement with any other person(s) or organization influences or attempts to influence the result of a match shall be deemed guilty of gross misconduct.
On confirmation of such allegation, the following shall apply:

ii. The result of the match shall be cancelled.

iii. In addition to the above the two clubs shall be expelled from the league.


iv. Any person(s)/club official(s) found guilty of involvement shall be banned for a minimum period of five (5) years.

Did the NFF get it right?
First, it is difficult to tell because the committee has not come out to tell Nigerians how far they took their investigations and what their findings were.

They also have not told us why they believed the clubs or officials are guilty.

Then again, if Sunshine Stars are guilty how come the result of the match was not cancelled and the team has not been expelled from the league?

If Dolphins are guilty how come they are told to pay ten million naira rather than the twenty million stipulated in the rules book, then why have they not been relegated?

This ruling brings out more questions than answers and the sooner the NFF explain this to Nigerians and those watching all over the world, the better for Nigeria.

In any case, Sunshine Stars, Dolphins and Ere Dokubo have all said they will appeal the decision of the committee and clear their names from this mess.
on February 10, 2012