The journey to Sfax started with a phone call asking me to get my equipment ready for the return leg. I was also given a brief of what was expected of me (I’ve since sent in my invoice sha).

Sunday in Uyo was a lazy day as we were to depart on Monday morning. I spent the better part of the day with Clement Nwankpa of NaijaSportsGrill, Akin Bolarinwa, Faith Oluchi and Sharon Macauley talking about life and all that.

Ekikerebong Monday cooked up a storm of a meal to cap up the day. That lady can cook but this a story for another day.

Monday morning saw me at the airport early and on time. We were told to be at the airport by 6.30am as departure was 8 am but being Nigerians that we are, we showed our hands once again.

Thirty minutes later, they sauntered in like they were coming from a picnic but that wasn't the only shock.


I heard clapping and singing.

Yes, folks were holding morning fellowship right at the premises of their airport as we waited to check in.

Na religion go kill us for Naija. We never ready.

My day went from bad to worse when members of the supporters club started a mini-riot right there at the airport. It was a shame to watch. Apparently, only a handful were picked to make the trip and that sparked off a plug and generated the ruckus.

It was a shameful sight.

We (Clement, Akin and Colin Udoh of KweseESPN) managed to find our way into the airport but alas there was another issue for me.

I didn’t have my yellow card with me and I was asked to pay four thousand naira (N4,000) for a new one. Shey yellow card no be 1k? Please if you've paid more than N1500 for one let me know.

After some agidi, I did pay ( e pain me sha, I won’t lie) and then checked in. Another two hours and we were airborne.

No, we didn’t fly straight to Kano. We stopped over in Kano to refuel and then we were off.

The flight to Sfax took about three and a half hours.

I have never flown over the Sahara in daylight. It was a sight to behold. I kept thinking what will happen if a plane crashes right there. It will take an eternity to locate it. Stretches upon stretches of sand and nothing more.


We touched down Sfax around 4.30 pm local time but could not get out of the airport until about an hour and thirty minutes later. The Tunisia immigration is one of the strictest I have ever seen.


No be small thing.

We got to our hotel, dropped off our bags and headed out to the stadium to watch the Eagles train but then we hit a snag.

The security guys stopped us from going in.

It was at that point it dawned on me that I need a refresher course in the language. My French is so bad now that I can’t even eke out a sentence to save my life.

I managed to string together some phrases and after a few minutes, we were allowed in but for just 15 minutes.

What I picked from the training basically was Rohr is going to go with the same starting eleven in the Uyo game on Tuesday night.

That was the ‘Koko’. 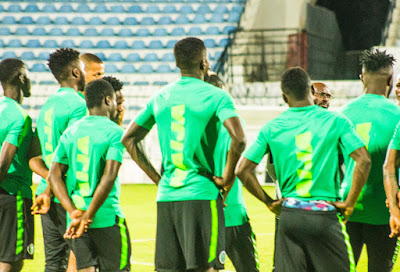 I met a few Libyan journalists at the stadium who told me our team is better than theirs but they were gonna beat us. I was also interviewed by two of them who were not impressed by my prediction of a win for the Super Eagles.

A few Libyan fans wagged their fingers gesticulating that Libya will win 2-0. 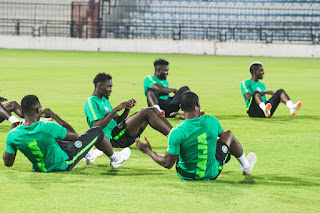 In their dreams sha. 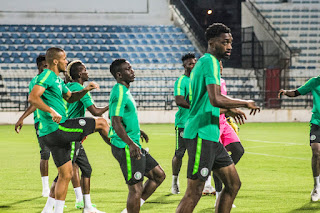 15 minutes done and it was back to the hotel for dinner.

Proper buffet and I had my fill.

I had to do a few reports and also record some notes for my colleagues back home in Nigeria. 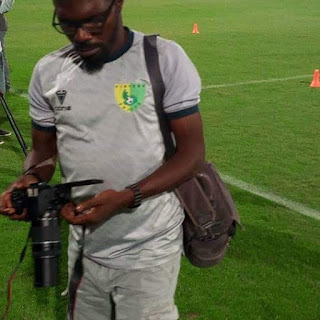 Can I add that Sfax is an upgrade on Kano? Refuse littered the streets even those you could see the cosmopolitan nature of the city with street lights, neon lights and several cafe's scattered around.

The stadium too apart from the lush laying surface looks like something from the medieval ages. You know how those Coliseums look like during the Roman Empire period? Yes, that, just like that.

Yes, the women are fine too but that isn't why I’m here but I can’t say the same for some of our colleagues whose eyes refused to stay in one place.

Tomorrow is another day.