Takeaways from the 2018 Ahlan Cup

The Ahlan Cup 2018 has come and gone with Kano Pillars retaining the title with a come-from-behind win over Wikki Tourists in the final at the Sani Abacha Stadium in Kano.

After nine days of beautiful football, Pillars stood tall and deservedly took home the trophy much to the delight of their fans.

Kano Pillars will fight for the title next season.

Well, I said the same last year and being six-time champions, they are always expected to be in the mix.

It won't be different this time and I think if they don't make the top two, it will be a huge disappointment.

A squad that has Rabiu Ali, Gambo Mohammed, Emma Anyanwu, Jamal Sikiru, Chris Madaki and Junior Lokosa will always be favourites for the title no doubt but Pillars dipped into the transfer market and got new players will no doubt add more quality to the team.

Centre back Austin Igenepo, Chinedu Sunday, Austin Ayaya, Bature Yaro, Shammah Tanze and HIFL revelation Ebuka Odenigbo are some of the the newcomers in the team who are expected to add more quality and depth to the squad

'The new coach of Wikki Tourists was Maikaba's assistant at Akwa United and if you know how Maikaba's teams love to play then you will definitely know where I'm going with this.

I saw Wikki dismantle Niger Tornadoes easy even after going a goal and down and they also drew with Pillars in a group game before the final.

Their Barcelona-esque style of play was a beauty to watch and even though it came in bits and pieces, it was refreshing to watch.

Their one-touch passing game was music to my soul. Watching Idris Guda switch between the midfield and the wings with relative ease was eye-catching and then there was the case of Waziri Chris bombing down the left channel like a boss when the team switch from a 4-3-3 to a 3-5-2.

Wikki might not be title contenders but I'll definitely want to watch them play next season.

Ali Zubairu is on to something in Bauchi. I want to see more of it.

I reckon the loss in the 2018/Aiteo Cup final to Rangers hastened Obiazo's departure from Pillars but I don't think his absence will be felt between the sticks at the Sank Abacha Stadium solely based on the form of Danladi Isah who shone like a million stars at the Ahlan Cup 2018.

Maybe the presence of Mr 'Clean Sheet' Suraj Ayeleso has woken Danladi from slumber or he's finally been liberated after living under Obiazo's shadow.

The veteran was deservedly voted Goalkeeper of the Tournament' and looks to continue in that form in the new season.


He made great saves throughout the competition and bar that moment of recklessness against Yarmalight when he conceded a penalty, he had a brilliant tournament and I reckon except something of unimaginable proportion happens, Danladi should be Kano Pillars first-choice goalkeeper.

This might sound like cliché', but I just have to say it again - Kano fans love Kano Pillars.

It doesn't matter what competition it is or what time of the day it is, Pillars fans will always troop out to the stadium to support their team.

Matches at the 2018 Ahlan Cup were played as early as 9 am and as late as 4 pm but that didn't matter as far as Pillars are concerned.

The fans will always be at the matches to cheer their fans and watch their heroes.

They also have the traditional songs that they chant out during games to add flavour to the matches. 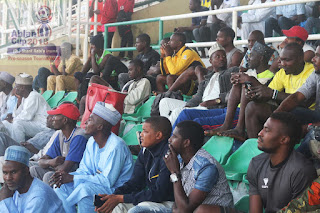 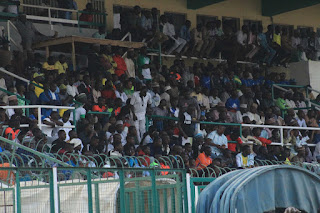 It is only pre-season but the fans are here in full effect.

I gathered a few fans have however sworn to stay away from Pillars games in protest at the manner which the team lost the 2918 Aiteo Cup final even though an official of the Kano Pillars Supporters club told me they are in advanced talks to get the disgruntled fans back to Kofar Mata.

That's a first for me.

Let me spin a little tale before I get into it.

After the pre-match formalities between Rarara Academy and Yarmalight FC on Match Day Four, I took photos of the teams and then proceeded to the bench of Rarara Academy to photograph the players on the bench.

I saw this kid on the bench.

I wasn't sure what he was doing there but he had on him Rarara's matchday gear, shin guards with bibs to match.

Shehu was a player of the team. I'm not sure I've seen anyone that young playing in such a high profile competition.

I asked about him from his coach and I was told he is a player with the team with huge potential.

Even though he came on as a substitute in most of the games his team played, he was a pleasure to watch. Shehu showed he is one for the future in the semifinal against Pillars in the semifinal.

The 15-year-old was introduced in the second half and he sparked Rarara into life.

One touch passes and the pace is his hallmark and when Kano Pillars centre back Emmanuel Anyanwu bounced off him, my 'play of the day' was delivered.

He showed no fear at all

I hope he matures as expected and receives proper guidance from his coaches.

A lot of fans on sighting me and a few others at the Ahlan Cup kept asking us when the NPFL will resume. 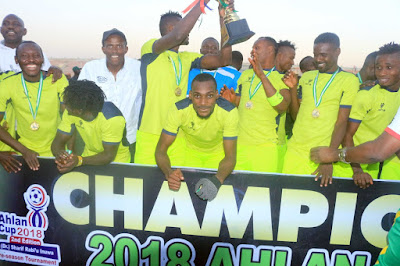 Of course, we had no proper answers.

It was evident that a lot of people are genuinely unhappy league football has been off since June.

A fan, Ibrahim Shehu told me that even though he is happy to attend the games at the Ahlan Cup, he wants the league to resume so his routine on weekends will be as it uses to be.

Another said his businesses around the stadium premises has nosedived due to the loss of human traffic during the regular season.

The players too were not left out as they complained bitterly of playing friendlies without any definite date to play competitive games.

Some attested to the fact that they only depend on salaries now as travelling allowances and match bonuses weren't forthcoming again.

Nigerians want the NPFL to resume by all means necessary.
on December 18, 2018